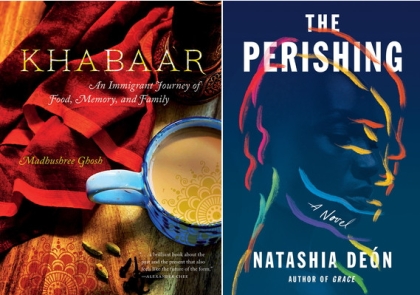 Madhushree Ghosh is the daughter of refugees, an immigrant, a woman of color in oncology diagnostics and a social justice activist. Her nonfiction been published in The New York Times, Washington Post, Longreads, Bomb Magazine, Catapult, Guernica, The Kitchn, Serious Eats, The Rumpus and others. Her work has been awarded a Notable Mention in Best American Essays in Food Writing and a Pushcart Prize nomination. She actively mentors women leaders in science and hosts food and discourse events at her home in San Diego. Madhushree has a PhD in biochemistry and a postdoctoral fellowship in molecular biology from Johns Hopkins University. She is also certified in Diversity, Equity and Inclusion from Cornell University as well as in Conflict Management and Global Negotiations from Thunderbird University, AZ.

Natashia Deón is a two-time NAACP Image Award Nominee for Outstanding Literature, Hurston/Wright Foundation Legacy Award Nominee in Fiction, a practicing criminal attorney, and author of the critically acclaimed and widely-reviewed novels, The Perishing and Grace, which was named a Best Book by the New York Times and awarded Best Debut Novel by the American Library Association’s Black Caucus. A PEN America Fellow, Deón has also been awarded fellowships and residencies at Yale, Prague’s Creative Writing Program, Dickinson House in Belgium and the Virginia Center for Creative Arts. She is a professor of creative writing at Yale, UCLA, and Antioch University. Her personal essays have been featured in The New York Times, Harper’s, The Los Angeles Times, Harper’s Bazaar, American Short Fiction, Buzzfeed and other places.

About Khabaar: Khabaar is a food memoir and personal narrative that braids the global journeys of South Asian food through immigration, migration, and indenture. Focusing on chefs, home cooks, and food stall owners, the book questions what it means to belong and what does belonging in a new place look like in the foods carried over from the old country? These questions are integral to the author's own immigrant journey to America as a daughter of Indian refugees (from what's now Bangladesh to India during the 1947 Partition of India); as a woman of color in science; as a woman who left an abusive marriage; and as a woman who keeps her parents' memory alive through her Bengali food.

About The Perishing: Lou, a young Black woman, wakes up in an alley in 1930s Los Angeles with no memory of how she got there or where she's from. Taken in by a caring foster family, Lou dedicates herself to her education while trying to put her mysterious origins behind her. She'll go on to become the first Black female journalist at the Los Angeles Times, but Lou's extraordinary life is about to take an even more remarkable turn. When she befriends a firefighter at a downtown boxing gym, Lou is shocked to realize that though she has no memory of meeting him, she's been drawing his face for years.