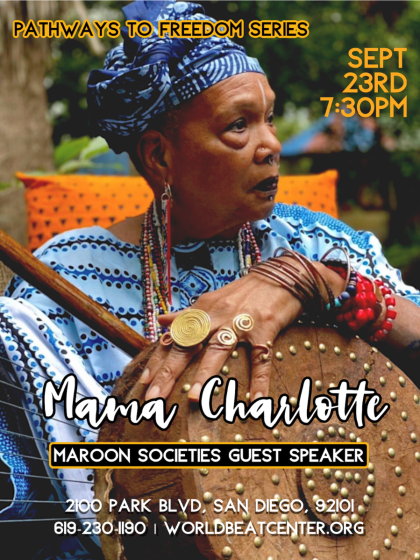 WorldBeat Center is excited to once more welcome Mama Charlotte to San Diego. She is returning with us as parte of our Pathways to Freedom exhibit programming speaking on her experience as a “maroon”, someone who fought and found freedom from racist oppression.

Charlotte Hill O’Neal or “Mama Charlotte” is a former black panther who has lived in the village of Imbaseni of northern Tanzania for decades now. She travels spreading art, knowledge and culture around the world.
After becoming one of the youngest members of the Black Panthers and marrying her husband Pete O’Neil they were both exiled to Algeria. Later moving to Tanzania and joining the African American and international revolutionary expatriates who helped President Julius Nyerere’s Nation building project. Together she and her husband founded the United African Alliance Community Center in 1991 with a mission to spread knowledge, creativity and empowerment for the youth of Tanzania in any setting they may find themselves in.