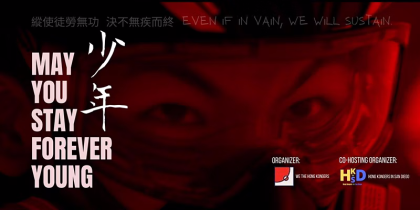 Film: May You Stay Young Forever

In June 2019, a series of massive demonstrations broke out in against of Hong Kong government’s attempt to revise and pass the Extradition Law. The government’s denial led to a chain of suicide attempts by young protesters to validate their opposition. This story takes place on 28th July, a week after the white mob attack in Yuen Long. YY, a 17-year-old girl, announces her attempt to end her life on Instagram. After that, she can’t be contacted or located. Nam, the 20-year-old “comrade” who met YY once in a protest-related arrest, along with other people in the city, frantically searches for her around Kwai Tsing district where she lives. Her photo and other information are posted on major online platforms, urging hundreds of volunteers to join the search. It’s a run against time. An emotionally exhausting hunt…