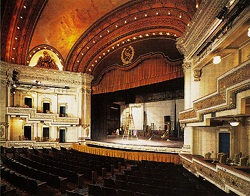 A jewel in the crown of San Diego, the historic Spreckels Theatre, which opened in 1912, is an arts venue located in the heart of Downtown.

The 1,463-seat theater first operated as a vaudeville house, then as a movie palace and now as a place to showcase live performances.

Spreckels Theatre was designated a National Historic Site in 1973. 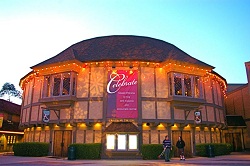 The internationally-acclaimed, Tony Award-winning Old Globe is one of the most renowned regional theatres in the country, and has stood as San Diego's flagship arts institution for over 75 years.

The Old Globe produces a year-round season of 15 plays and musicals on its three stages, including its highly-regarded Shakespeare festival. The Globe has become a gathering place for leading theatre artists from around the world, such as Tom Stoppard, Daniel Sullivan, and Chita Rivera, among many others. Numerous Broadway-bound premieres and revivals, such as Dirty Rotten Scoundrels, The Full Monty, and Damn Yankees have been developed at The Old Globe and have gone on to enjoy highly successful runs in New York and at regional theatres across the country.

The Old Globe is at the forefront of the nation's leading performing arts organizations, setting a standard for excellence in American Theatre.

The mission of The Old Globe is to preserve, strengthen, and advance American theatre by: Creating theatrical experiences of the highest professional standards; Producing and presenting works of exceptional merit, designed to reach current and future audiences; Ensuring diversity and balance in programming; Providing an environment for the growth and education of theatre professionals, audiences and the community at large.

Built in 1924, the historic Balboa Theatre was an elegant vaudeville and movie palace in the heart of downtown San Diego. At the time it was a state-of-the-art building that included six storefronts along Fourth Avenue, with 34 offices on the floors above.

The Balboa Theatre has been closed for over twenty years. After numerous efforts to privately renovate and reopen the Theatre, the commitment was made in 2002 to retain the historic Balboa Theatre as a public asset with the City's Redevelopment Agency funding its renovation and restoration and reopening the Theatre as a community performing arts center to be managed and operated by San Diego Theatres.

Upcoming events include opera and ballet.

For shows and tickets at either venue, see:
SDcivic.org 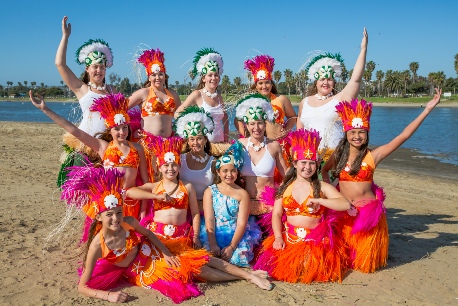 Learn dances from the islands of Hawaii, Tahiti, and New Zealand.

Persian music is a generally non-rhythmic music with each instrument using a single melodic line known as monophony. Both instruments and a singer are used to create the traditional sound of Persian/Iranian music. The tempo is usually fast and the ornamentation of instruments is dense. The vocals of the singer usually have a yodel-like quality known as Tahrir.

The history of Persian music is somewhat mysterious because notation in Persia was not used with significant regularity until the 1930s. Most information about early Persian music is found in documentation from artists, historians, and philosophers. According to these sources Jamshid, an Achemenid King, is credited with creating Persian music around the 6th to the 4th century B.C.E. The music was used in courts and for religious rituals. During the Sassanian Dynasty, between the 3rd and the 7th century C.E., musicians were given exalted status because of their connection with the courts' activities. During this period Barbod, a famous court musician, created a musical system known as Dastgah, which Iran's modern musicians still use in their compositions.

Barbodâ€™s system consisted of seven royal modes, 30 derivative modes, and 360 melodies. The new system created 12 dastgahs, each with a designated eight-note scale, and 365 melodies (gushes), which are only four or five notes long and create a foundation on which the musician can make changes or improvise. Each melody flows effortlessly to the next with the use of transition fragments called foruds. Finally, the combination of all pieces that make up the repertory of Persian music is called the radif (row). Thus, the radif of Persian music contains the 12 dastgahs with all of their constituent gushehs. An accomplished musician knows all the 12 dastgahs and corresponding gushes and foruds. The musician has the ability to improvise them, changing the rhythm and melody just enough to sound different while not changing the original melody.

After the Sassanian Dynasty came the Iranian Period, from the 7th to the 15th century, which suppressed music and any musical activities. After this suppression came the renaissance of culture in Persia, between the 16th and the 18th century, when the Safavid Dynasty came into power, but even though the Persian culture was flourishing, music was being suppressed during this time due to the Shia Islam outlook on music as a corrupting, frivolous activity. When the Qajar Dynasty was in power from 1785 to 1925, great improvements were made to Persian music, including the establishment of the dastgah system, which is used today in Iranian music. In 1935 Persia's country name was officially changed to Iran. During the Pahlavsi Dynasty from 1925 until 1979, music in Iran was restored as an important part of Iranian culture and one to be held in esteem. Since then, traditional Persian music has attracted a lot of attention and interest.

In modern Iran, traditional Persian music is rooted in religion and played in many different types of ceremonies. Traditional Persian music has connections with Sufism, a sect of Islam, and is considered a way of having a religious connection with the divine spirit. Sufis believe that their music invokes the word of God. Western pop has also influenced the music of Iran and is played anywhere that music is enjoyed.

Tar - A stringed lute instrument that has two octaves. Five of the strings are steel and one is brass. It is plucked to produce sound and is tuned according to what Dastgah is being played.

Setar - A stringed lute that has the same two octave range as a Tar, but with only four strings.

Santoor - A dulcimer instrument that is played with two delicate wooden mallets, with a range of three octaves. It has 72 strings that are arranged in sets of four, and each string within the sets are tuned to the same pitch.

Barbat - A plucked string instrument with nine to eleven strings.

Tanbour - A plucked string instrument with a pear-shaped body and three strings.

Ney - A wind instrument similar to the flute with six finger holes.

Tombak (or Zarb)—A one-headed drum that is carved from a single piece of wood. Its circumference is smaller on the bottom and is open, while the top is larger and has a sheepskin membrane stretched across it.

Western instruments such as the violin, piano, accordion, violincello, clarinet, and trumpet are also used in modern Persian music. A "singer" is also usually present and reciting Sufi poetry which sometimes sets the rhythm for the piece.

The Joomla! content management system lets you create webpages of various types using extensions. There are 5 basic types of extensions: components, modules, templates, languages, and plugins. Your website includes the extensions you need to create a basic website in English, but thousands of additional extensions of all types are available. The Joomla! Extensions Directory is the largest directory of Joomla extensions.

Components are larger extensions that produce the major content for your site. Each component has one or more "views" that control how content is displayed. In the Joomla administrator there are additional extensions such as Menus, Redirection, and the extension managers.

Modules are small blocks of content that can be displayed in positions on a web page. The menus on this site are displayed in modules. The core of Joomla! includes 24 separate modules ranging from login to search to random images. Each module has a name that starts mod_ but when it displays it has a title. In the descriptions in this section, the titles are the same as the names.

User modules interact with the user system, allowing users to login, show who is logged-in, and showing the most recently registered users.

These modules display information from components other than content and user. These include weblinks, news feeds and the media manager.

Navigation modules help your visitors move through your site and find what they need.

Menus provide your site with structure and help your visitors navigate your site. Although they are all based on the same menu module, the variety of ways menus are used in the sample data show how flexible this module is.

A menu can range from extremely simple (for example the top menu or the menu for the Australian Parks sample site) to extremely complex (for example the About Joomla! menu with its many levels). They can also be used for other types of presentation such as the site map linked from the "This Site" menu.

Breadcrumbs provide users with information about where they are in a site.

Templates give your site its look and feel. They determine layout, colours, typefaces, graphics and other aspects of design that make your site unique. Your installation of Joomla comes prepackaged with three front end templates and two backend templates. Help

Plugins are small task oriented extensions that enhance the Joomla! framework. Some are associated with particular extensions and others, such as editors, are used across all of Joomla. Most beginning users do not need to change any of the plugins that install with Joomla. Help